Registering contributors (Retirement Savings Account (RSA) holders) under the Contributory Pension Scheme (CPS) is one of the main ingredients for the success of the CPS. Registration of contributors by Pension Fund Administrators (PFAs) under the Scheme started in February 2006.

Based on available data from the National Pension Commission (PenCom), the total number of contributors under the CPS as at 30 April 2020 was only 9,005,498 compared to Nigeria estimated population of around 200 million, even at a viable 10% estimated working population, that’s 20 million people.

This means that the CPS arguably still has the opportunity to at least double Retirement Savings Account RSA contributors. To increase the number of contributors under the CPS, among other reasons, PenCom in March 2019, launched the Micro Pension Scheme, which enables people working in the informal sector to participate under the Scheme.

In this piece, we are looking at the history, i.e increase in the number of RSA contributors from inception in February 2006 to end of April 2020 and the challenges of increasing RSA contributors in 2020.

Pension Fund Administrators (PFAs) started registering contributors under the CPS in February 2006. As at the end of December 2006 a total of 1,504,297 Retirement Savings Account holders had been registered under the Scheme, with the public sector 1,036,839 having over double of the registration in the private sector 467,458. This was majorly due to the fact that the Federal Government ensured that its employees complied with the provisions of the Scheme by ensuring awareness among the public sector employees with series of sensitisation programmes focused on them at the early stages of implementation of the scheme. 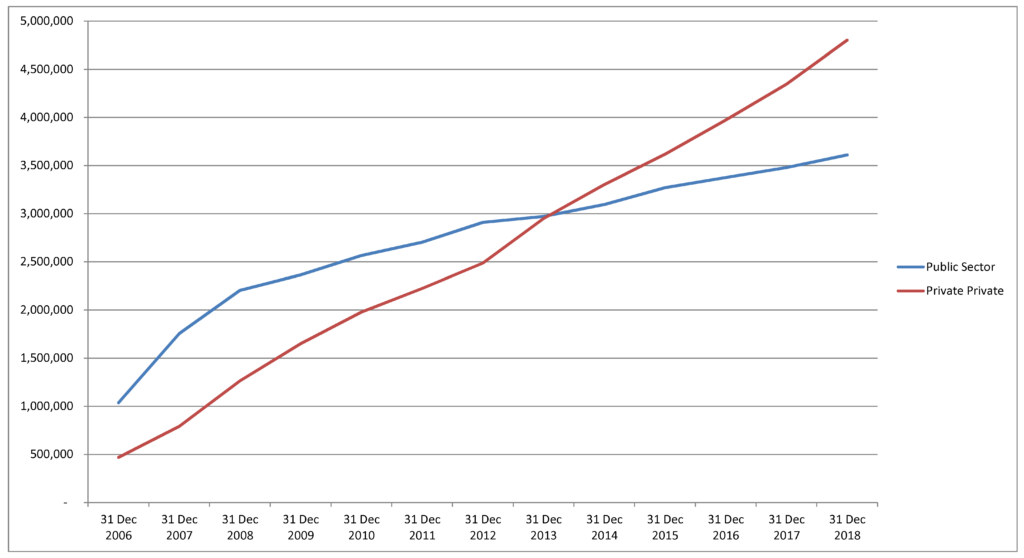 What caused the sharp reduction in the usual increase in RSA Contributors for 2020?

Those not following the industry critically will quickly attribute the sharp reduction in the month on month increase of RSA contributors in 2020 to only the global Coronavirus pandemic. Acute industry watchers know that we also have to consider the Data clean up exercise going on in the pension industry. PenCom, the regulator for pension in Nigeria, in 2018 commenced a data clean up exercise for the industry in which one of the objectives was to identify and eliminate multiple registrations from the RSA Contributors Database.

The exercise was skeletal in 2018 and early 2019 but we noticed an increase in the exercise from last quarter of 2019 to 1st quarter of 2020. Also, coincidentally PenCom didn’t release the monthly report for number of RSA Contributors from June 2019 to February 2020. The figure we have for September 2019 was disclosed by the Acting Director General. Hajia Aisha Dahir-Umar, during a 2019 Journalists Workshop. The data clean up exercise would have resulted in the invalidation / deletion of some Retirement Savings Accounts. Unfortunately, PenCom has not been releasing the number of invalidated RSA contributors accounts so we might not be able to identify the actual number attributable to the data clean up exercise.

The Coronavirus pandemic in Nigeria which started around late February 2020 has had an adverse effect on practically every sector in Nigeria. It has led to some companies closing down, reducing salaries, or placing embargo on employment. It is also necessary to note that some sectors are still under lock-down i.e Schools, Churches, Clubs, Event centres etc. All these have contributed greatly to the reduction in the number of new employees that PFAs are able to register.

Total RSA Registration as at 31 October 2020

Support PensionNigeria here, empower us to do more

Performance of all PFAs in Nigeria for Full Year 2020

Performance of all PFAs in Nigeria for Full year 2019

Performance of all PFAs in Nigeria for Full Year 2018

Total RSA Registration as at 28 February 2021

Status of Contributory Pension Assets as at February 2021

Status of Implementation of CPS in States as at December 2020

ALWAYS REMEMBER THAT, PROCESSING OF PENSION IS FREE

Here are the other things we want for the Pension Industry in Nigeria.

What PenCom is Doing to Ensure Employers Remit Pension Contributions.

Challenges of the Contributory Pension Scheme and What PenCom is Doing.

This is how to Avoid Poverty at Old Age, PenCom advises Nigerians.

Processing of Pension is FREE

The National Pension Commission (PenCom) has released a step-by-step procedures for online enrolment (retiree self- registration). See full details below;

Nigeria Is Drifting: We Must Stop Waiting For Godot

This website uses cookies to improve your experience while you navigate through the website. Out of these cookies, the cookies that are categorized as necessary are stored on your browser as they are essential for the working of basic functionalities of the website. We also use third-party cookies that help us analyze and understand how you use this website. These cookies will be stored in your browser only with your consent. You also have the option to opt-out of these cookies. But opting out of some of these cookies may have an effect on your browsing experience.
Necessary Always Enabled
Necessary cookies are absolutely essential for the website to function properly. This category only includes cookies that ensures basic functionalities and security features of the website. These cookies do not store any personal information.
Non-necessary
Any cookies that may not be particularly necessary for the website to function and is used specifically to collect user personal data via analytics, ads, other embedded contents are termed as non-necessary cookies. It is mandatory to procure user consent prior to running these cookies on your website.
SAVE & ACCEPT